One of the things I might not have mentioned in the earlier post about the weekend was the wicked cool 4th annual Optimist Club Bike Swap at the local high school last Saturday. People were to drop off old bikes at 9am and come back at noon and based on your "number" you were called and got to pick up any of the bikes left.

So we dropped off 2 old bikes at 9, we were number 13. And at noon I went back with the girls and let Aubrey pick a bike - there were like 50 kids bikes. And I let Molly pick one and then we crossed our fingers and hoped that when they called our number those bikes were still there. 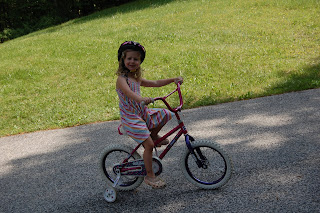 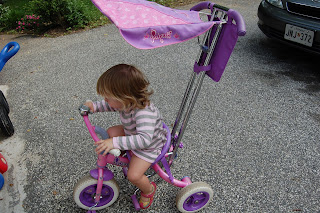 Aubrey rocks that bike! She is a pro and cruises around the driveway and around my car and so far hasn't hit here sister, her parents, or the dog.

That is a very cool idea!! There should be more 'swaps' in life, make things so much easier on the world.

We used to do that with skis (and boots) when I was young. But you "sold" and "bought" them. Even if no-one bought your skis - you still got $$ for them.
GREAT IDEA!

Molly's bike is so ridiculous! I love the little thing on top. Great sun protection?

Ask her if I can borrow it.

What a fantastic idea - I wonder if we have that around here?

Course I guess I should let Graham learn to ride his new bike before I think about trading it in...