A few weeks ago, I was talking with my sister and we decided to institute Monday night dinners. We live about an hour from each other and really only see each other in the monthly family dinner that involves a LARGE group of people. It is hard to get to know Arley (my nephew who is 17 mos) when I am chasing down my kids in the group.

So last Monday, she and Arley and her hubby (TOD), headed up to the country for dinner and romper room. We had a wonderful time and played outside and I got to see a side of Arley I have only heard about from my dad. There were giggles and squeals and general fun. 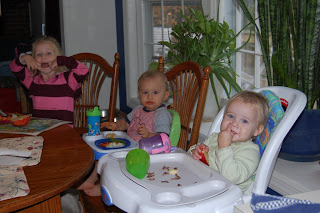 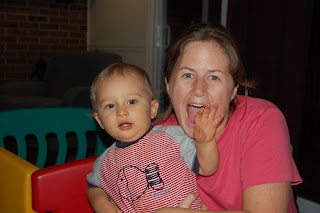 Last night the girls and I made the trip down to my sisters. We headed through Baltimore City where Aubrey saw "smoke snacks" and insisted we were in New Jersey. Aubrey also kept me entertained with stories of her friend Chachy (as in Joane and ... or that is what it sounds like). This friend is from New York City and lives in a shot tower. This friend also told Aubrey to tell me that I was driving the wrong way and needed to turn to get to Nanny's (She was right we were passing the road we would normally turn on to get to Nanny's) and that if I continued straight a big bear would be in our way.

We got to my sister's and she had made a wonderful dinner. After dinner we went to the basement and had a VERY fun time playing with all the toys. Arley took the big blue ball and used the baby swing to leverage himself up on the big blue ball to do "bouncy bouncy". It was awesome! The kids played in the catepillar tunnel and with some other toys but the big blue ball proved to be the most fun. After a wonderful dessert, we (the 3 adults), used the big blue ball to play catch, but you had to bounce the ball off of a child's head first. There was much rough housing and falling and even more giggling and big belly laughs from all involved!

It is all fun and games until my children spit up on the nice rug... and we headed home.

We did make one stop at Nanny's house to give hugs and kisses. She had surgery on her foot last week and is doing GREAT!

My parents have their internet connection back so I will be expecting some comments or acknowledgement or blog readings.

We had so much fun with you all! Thanks for coming! Hope the girls are okay. Sorry they don't like my food. Oh by the way, Arley will be 17 months on Oct. 15th. :)

I wrote 17... didn't I? :) They did like their food. Molly, I believe, had spoiled soy milk yesterday and Aubrey throws up when she eats stuffing or sees someone else throw up... so fun all around :)

David and I need to try that ball game. Sounds like lots of fun!

I love the blog but I have to comment on the smoke stack comment regaring NJ. NJ is the beautiful Garden State. We need to expand Aubrey's view of NJ :)

I agree with Scott - NJ is quite beautiful - I am guessing she only sees it on the way to Maine....the turnpike is SUCH a poor representation of the Garden State! And you do realize that you were MAYBE 10 minutes from my house last night?!